Consultations for the Establishment of a Border Carbon Adjustment Scheme

Consultations for the Establishment of a Border Carbon Adjustment Scheme

On November 13, 2021, Posted by Bernard Colas , In International Analysis,

Many of Canada’s partners are about to set into motion border carbon adjustment (BCA) schemes that will likely take the form of additional customs duty on products imported from countries with lower environmental standards. The setting up of carbon mechanisms in the industrialised world is also likely to end up in a chain reaction made of tariffs and sanctions since several developing countries challenge the legality of such adjustment systems. The European Union should put in place its system by 2023, and the United States should normally be the next player to set up a BCA scheme.

In a move to attain its carbon-neutrality objective, the Canadian government announced it was examining the possibility of setting up a border carbon adjustment scheme. The government of Canada then confirmed in the Budget 2021 that it initiated consultations with provinces and territories as well as with a restricted group of Canadian importers and exporters. The consultation will soon be open to all Canadian businesses, and CMKZ is ready to assist them in making their voices heard and defend their interests in the course of such consultations.

A Consultation of Paramount Importance for Canadian Businesses

Consultations between the government and a small group of companies producing CO2 emissions-intensive goods started in August. The government of Canada now indicates that it will consult the larger public during autumn. The consultations will be held under the auspices of the Ministries of Finance and Environment. The Canadian BCA would mainly consist of tariffs on products imported from countries where no carbon pricing system exists or when such a system is less effective than the one applied in Canada. Canada’s strategy revolves around the following four goals: reducing the risk of carbon leakage, maintaining the competitiveness of domestic industries, supporting greater domestic climate ambition, and driving international climate action. 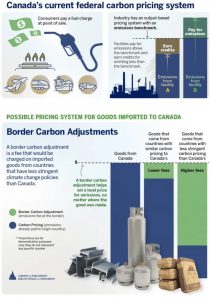 Impacts and Consequences of Setting Up a Border Carbon Adjustment Scheme

Implementing a BCA would have major positive and negative repercussions for Canadian businesses and consumers alike. On the positive side, companies would benefit from fairer competition as carbon-intensive imported goods would be subject to tariffs to neutralise any “environmental dumping”. Conversely, a BCA would likely increase the cost of inputs used by Canadian companies. To avoid penalizing Canadian exports, the government evoked the possibility of compensating companies exporting in markets where no BCA is in place. However, a BCA, including any type of support for exports, will probably be challenged before the World Trade Organization, or be the object of counter-tariffs which will increase unpredictability. In addition, if Canada goes ahead, it will need to determine which goods are subject to the BCA, e.g., carbon-intensive goods only or all goods. It will also need to determine carbon thresholds and a methodology for calculating the footprint of each product. Canada will also need to determine which systems it deems equivalent or inferior and negotiate mutual-recognition agreements with its trading partners. This could be complex in the case of products resulting from complex supply chains or companies using inputs from various countries. Therefore, the stakes are high and Canadian companies should be ready to hear their views from the Government of Canada to ensure the best system possible.

CMKZ Stands Alongside Canadian Companies Likely to Be Affected

CMKZ encourages Canadian companies to engage in BCA consultations actively, given the importance of this system’s impacts on them or their clients. Our team stands ready to accompany you to ensure your concerns are heard and make sure your company can defend its interests on the occasion of consultations.

Our team will also soon share a new blog post summarizing the ins and outs of such BCA schemes, with a particular focus on the EU and the United States as their forthcoming BCAs are also likely to have adverse impacts on Canadian companies.

In this context, CMKZ recommends that Canadian businesses active both on the domestic and international markets to:

For more information on the Border Carbon Adjustment Scheme and recommendations, do not hesitate to contact Bernard Colas or one of our other CMKZ lawyers specializing in international trade law. CMKZ would like to thank André-Philippe Ouellet, CMKZ Collaborator, for his important contribution to the preparation of this blog.